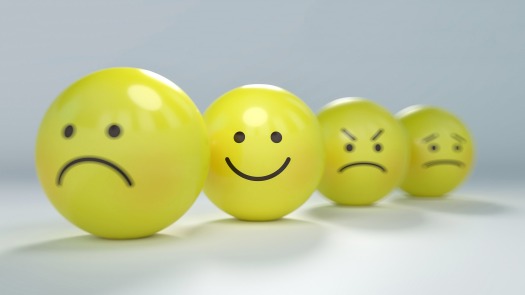 Do you research into emotions or emotional matters? Do you consider certain emotions as part of understanding or explaining your research matter? Or, do you consider sociological theory interesting and relevant?  Then consider taking this Autumn course on sociology of emotions.

The course will familiarize students with classical and contemporary perspectives in the sociology of emotions and enable them to critically discuss theoretical assumptions, methodological approaches and empirical results within the sociology of emotions. Moreover, it will contribute to advancing a theoretical framework and methodological approach to a specific research problem in the student’s project. Students may examine the course with (7,5 hec) or without (3,5 hec) a course paper.

The course offers a broad overview of theories and research in the sociology of emotions, covering both structural and situational/interactional approaches to the role of emotions in social life. Part of the course deals with the students research projects, through which there is opportunity to discuss project ideas in relation to the perspectives on emotions presented. There will also be opportunity to discuss various methods employed and ways to apply and develop theory in the analysis of empirical data. The course offers both a broad perspective on the state of the art of the sociology of emotions, as well as in-depth specialization in the chosen area. (For further information see attached course program with all details here!) 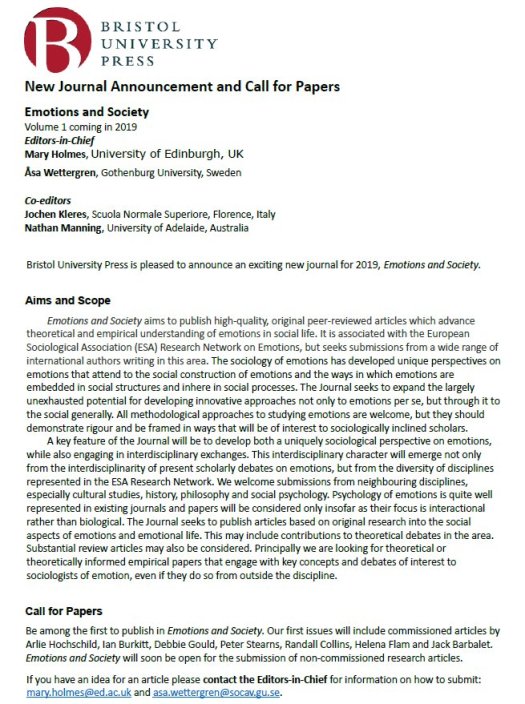 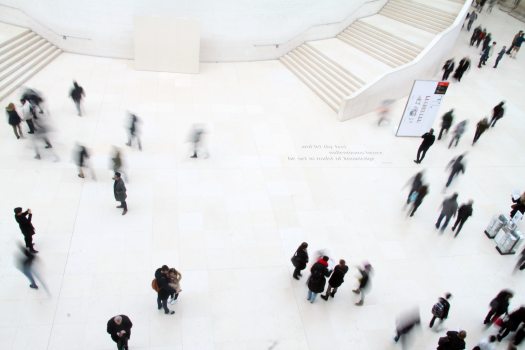 If any of you are around Belfast/Queen’s University on Friday feel free to drop in to this! 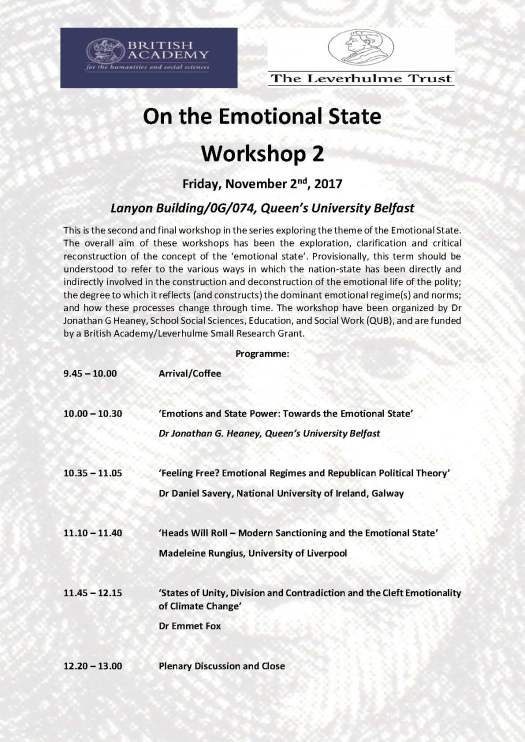 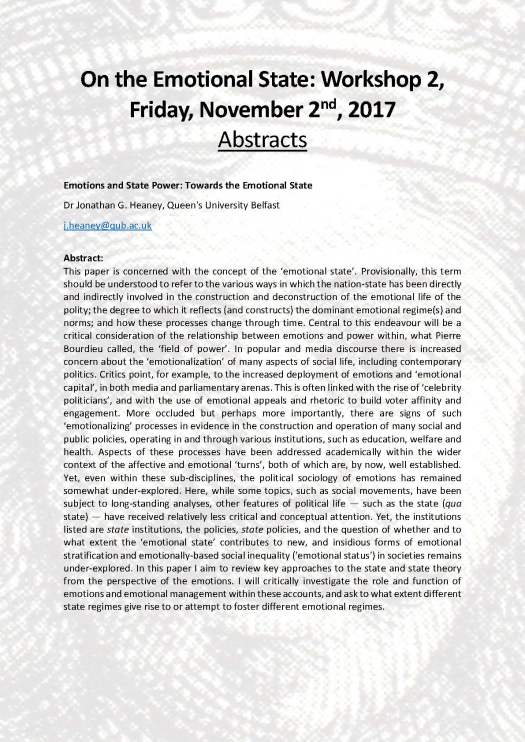 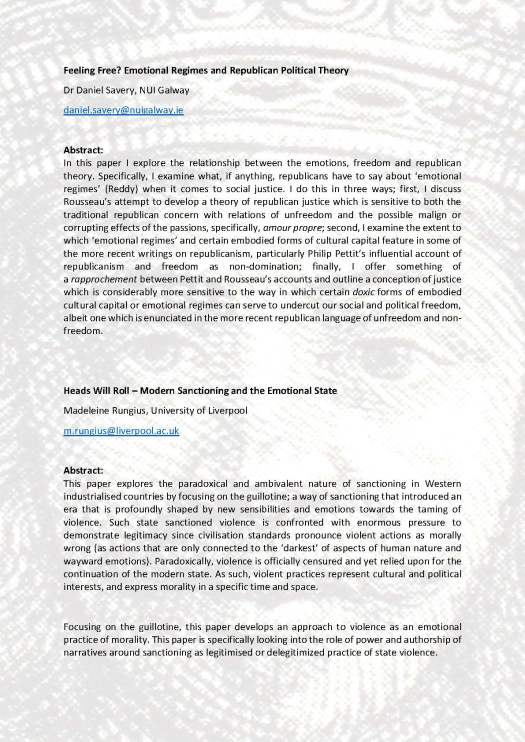 The Board of the ESA RN11 Network (Stina, Monika, and myself) have finalized the schedule of papers for the big ESA Conference in Athens in August. The full programme will be released by the conference organizers soon, but the Sociology of Emotions sessions should look something like this (pdf, including details): ESARN11_Athens_Sessions_FINAL.

We look forward to meeting old and new friends in Athens, so if you are interested in affect and emotion, and are there, do come along and say hello! 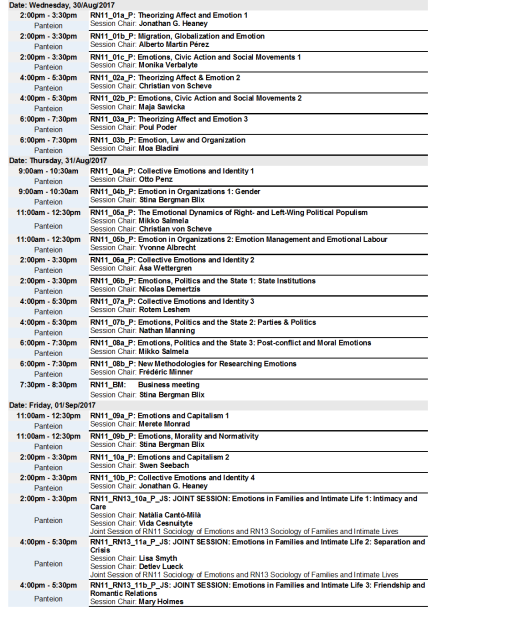 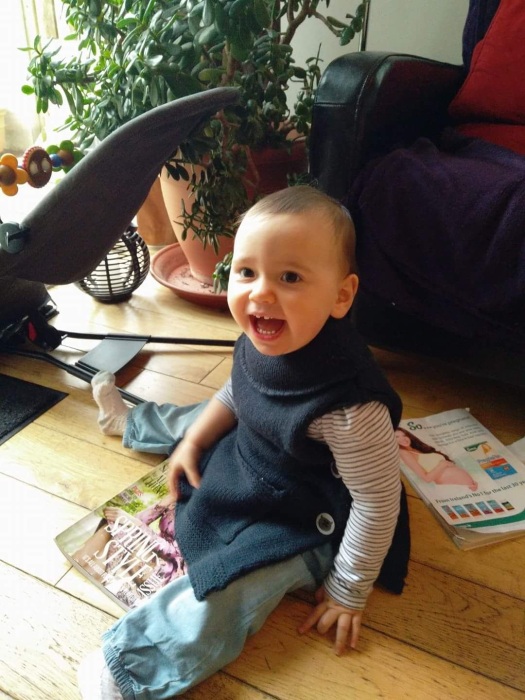 I am eventually getting my mind around the possibility of attempting to begin to consider blogging a bit more and revitalising this old site with some new posts and reflections. At last. And it may not actually happen. Since I last wrote here my partner Fiona and I have had this alien creature crash-land into our lives, with devastating effects on sleep and productivity. It is now over a year old and still alive. We call it Hazel Rose (Hazel Rose Heaney=HRH, does nominative determinism work for initials?).

I am currently working on a load of stuff: theorizing affect and emotion from a process perspective, emotions and party politics, a related, ongoing project on the ’emotional state’ that I hope to get some additional funding toward, and a book, based on a revised version of my PhD, under contract with Routledge, and more. I may write about aspects of these projects here in the future.

Since coming to QUB I have been teaching a lot too, mostly social theory at UG and PG levels, and a bit of political sociology, sociology of emotions, narrative methods, and a few other odds and ends. I have been thinking about this — teaching theory, and ‘theory anxiety’ — a bit too, especially in relation to (my now completed) PGCHET assignments (which should work towards my FHEA qualification). I may add some thoughts here about all that also. This is still primarily a declaration of intent and an attempt to embarrass myself into blogging more, but I did write a blog on teaching and doing theory for Mark Murphy’s excellent site socialtheoryapplied last summer, which I intended to link to here, but didn’t. Here is that link now. 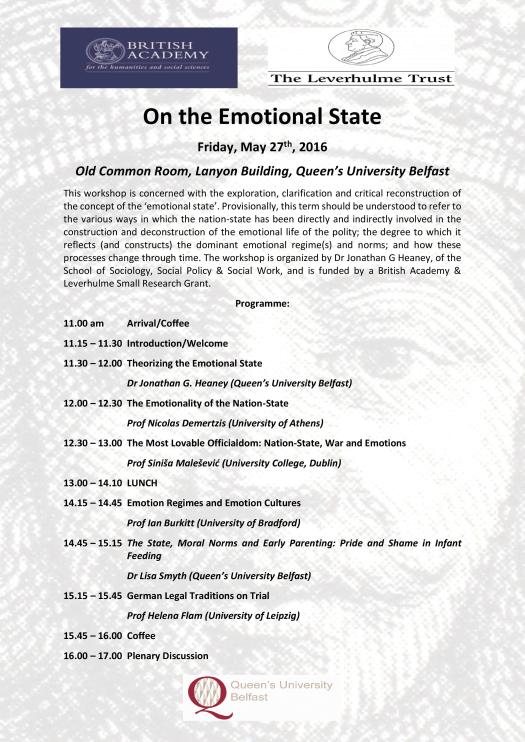 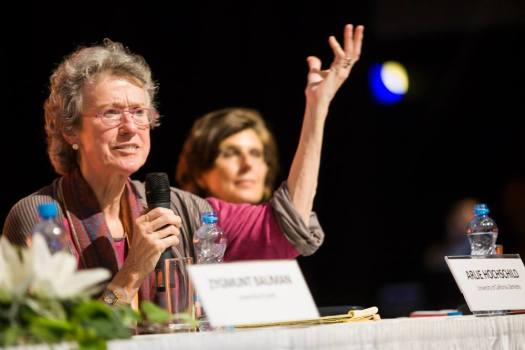 I had the pleasure of attending and presenting at the 12th European Sociological Association Conference in Prague last August, where Prof. Arlie Hochschild (Berkeley) gave one of the plenaries at the opening of the event.

I really enjoyed the paper then, and a video of the plenary has been uploaded to the ESA website here.

The talk reflects, and reflects on, Hochschild’s recent interest in the connections between emotions and politics, and especially political persuasion, which intersect with my own ongoing interest in the linkages between emotions and power, and my new project on (what I am calling) the ’emotional state’. The talk here emerges from her recent work in the American South (especially Louisiana), and the interviews she conducted with members of the right there.

In the presentation, while of course foregrounding emotions and emotion management (to which literature in the sociology of emotions Hochschild has already made substantial, indeed, seminal, contributions to), she introduces a new concept of ‘deep stories’. These are  allegorical, collective and honour-focused stories that, she suggests, lie behind the growth of the right (especially the Tea Party) in the US (and presumably in Europe too). These stories and the emotional logic behind them, will help us to better understand the contemporary political polarization that is emerging in tandem with the increase in social inequality. They will also help us  to understand what it feels like to be a ‘Mary Beth’, and, rather than retreating to our own ideological silos, that we might be able to understand them, and each other, a bit better. It might also help to reaffirm the role of ‘honour’ in social and political processes. The social importance and explanatory value of a political sociology of emotions is here again underlined.  These themes will be explored further in her forthcoming book Strangers in Their Own Land: A Journey into the Heart of the Right. I will suspend judgement until I read that full treatment but the concepts here are certainly interesting. Sitting here in Belfast as I write this, I can, for instance, see some scope for the deployment of ‘deep stories’ in trying to understand the emotional logic of politics here too.

The abstract for the talk is below.

I begin with a paradox. In the United States, as in Europe, the gap between rich and poor has recently widened. At the same time, right-wing groups have risen for whom such a gap poses no problem at all. Based on new fieldwork on the U.S. Tea Party (approved by some 20% -30% of Americans) I ask: what emotional needs does such a movement meet? More basically, how does emotion underlie political belief? In answer I propose the concept of a deep story. It’s an allegorical, collectively shared, honor-focused, “feels-as-if” story. A man is standing in line for a ticket he feels he greatly deserves and which confers honor. At the front of the line is another man behind a dark glass window handing out tickets. In front and in back are others in line. To the side, is an official supervisor of the line. Then some people “cut into” the front of the line, and the story moves from there. Tickets are for the American Dream. The supervisor is the American president, and a rumor is flying that tickets are running out. They – and all of us — see through allegory. And once established, we protect it by pursuing an emotional agenda. This determines what a person wants to feel and know. Liberals have a deep story too. Each story – that of conservative and liberal — implies a strategy of action for addressing global capitalism, and the frightening idea that American –and European –dominance and prosperity may be a “prophecy that fails.” The idea of “deep stories” may help us communicate across a widening political divide and address the issues of difference, inequality –with imagination and compassion

In the introduction to my new Global Society class in QUB today I mentioned Bauman’s work on Liquid Modernity in the context of debates on globalization. In this lecture, given in Aarhus in 2012, he gives a useful overview of his approach to some of these issues, which (my own) students especially might find interesting.

In this talk (from a few years ago, 2011 I think), sociologist Ulrich Beck outlines and updates his theory of reflexive modernization and the ‘risk society’. He suggests that, to the extent that risk is experienced as omnipresent in the current age, there are only three possible reactions: denial, apathy or transformation. The first, he says, ‘is largely inscribed in modern culture, the second resembles post-modern nihilism, the third is the “cosmopolitan moment” of world risk society’.

In the talk that follows he structures his argument around three key points. In  the first he outlines the distinctive, new features of this world risk society. There is a distinction between risk and catastrophe – they are not the same things. Risk is about the anticipation of catastrophe. This is why, despite the fact that Europe and ‘The West’ are relatively safe, globally speaking, or perhaps even ‘objectively’ so, it is the global anticipation of catastrophe (propagated via symbolic forms in the mass media etc) that is fundamental to the shaping of contemporary societies. These global perceptions of risk have three features: de-localization ( in spatial, temporal and social terms), incalculableness, and non-compensatibility.

His second key point stresses the fundamentally global character of these process, over and against the nation-state as a political level of analysis, and transformative action. Against this methodological nationalism he offers a defence of his cosmopolitan vision for the social sciences, outlined in more detail in his Power and the Global Age (2005). His final point offers some consequences of his position, in general, and a (sympathetic) critique of alternative theoretical conceptions of risk, most notably those of Mary Douglas and Michel Foucault. What is needed is a paradigm shift in the social sciences – the emergence of a cosmopolitan social science – a ‘cosmopolitan turn’.

This defence of cosmopolitanism – his cosmopolitical realpolitik –  is, of course, open to many criticisms and questions, as are his wider arguments about risk, decision-making etc.  There are some questions/discussion after 26 mins or so.